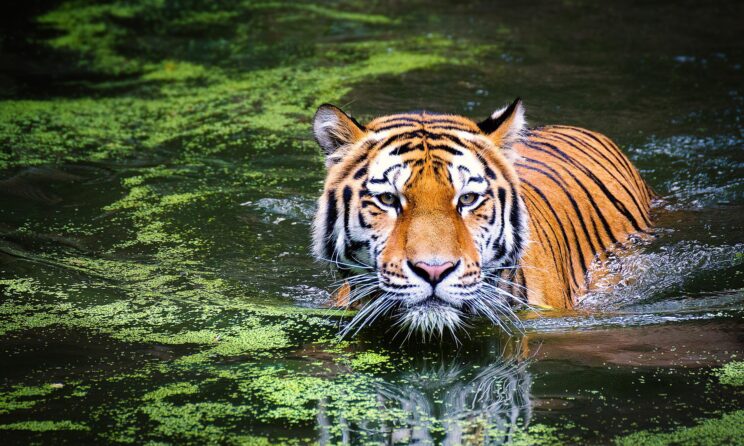 Where do tigers live?

This is a very good question because at one time tigers lived in many places and were abundant in numbers. Today, however, the tiger is an endangered species, meaning they are quite close to becoming extinct. This is due to their habitat disappearing and through hunting for their skins, bones, and teeth.

In answer to the question ‘where do tigers live?’ They live in about 13 different locations around the world, but in very small numbers. The main country that has the most tigers is India, and in 2018 there were around 3,000 tigers, which made up about 70% of the total population of tigers globally. The latest figures, however, from the world wildlife website suggest as little as less than 4,000 tigers remain globally.

Tiger numbers are fairly difficult to keep track of due to a number of factors. Poaching still exists because tiger skins, bones, and teeth are so valuable and are readily available on the black market. Also, with dwindling habitats, it can be difficult for tigers to continue to breed and successfully raise cubs.

Another problem with trying to increase tiger numbers is the fact that a female can only produce cubs once every 2 years or so, and it’s very rare for all cubs to survive the first two years. Generally only one survives, and two if they are very lucky. All the above factors make it extremely difficult to make a significant comeback for the tiger, which is why it’s so important for companies like www.worldwildlife.org to keep fighting for the tiger, and its recovery.

Www.worldwildlife.org has a ‘adopt a tiger’ program where you can donate to a worthy cause and know that your donation will be used for something worthwhile, and we encourage you to check out their website, even if it’s just to read the work that they do.

Other countries where tigers live are Vietnam, Nepal, Bhutan, China, Thailand, Russia, Malaysia, Indonesia, Cambodia, Laos, Myanmar, Bangladesh, and as mentioned above, India. Most of these countries have a small number of tigers, some with less than 200, so you can see how rare these majestic creatures really are.

Here is a list of countries where tigers live and the approximate number of tigers in each country, though the numbers listed could be much lower, due to the fact there is no recent information confirming actual numbers:

China (south): Likely less than 100 (though there are tiger farms)

These numbers are bad for any species, and it’s difficult to imagine these creatures won’t become extinct in the next few years, but work is being done by many to ensure the survival of tigers. An article published recently mentioned that tigers in Thailand are making a comeback thanks to the sanctuary in Huai Kha Khaeng where tiger numbers have doubled in the last 15 years.

What is a tiger farm?

A tiger farm is a facility that breeds tigers for profit, in short, the demand for tiger skins, bones, and teeth are such that it is big business. In fact, there are more tigers on tiger farms than there are tigers in the wild. You may be forgiven if you’re thinking this is a good thing, but it has nothing to do with conservation, it’s all about money.

Chinese medicine and myths about the tiger and its properties are the main reason for such demand. The tiger is thought to have magical properties that heal and are almost a staple for many Chinese people who don’t know any better. Tiger farms supply that demand, tigers are bred simply for their commercial value, and often they are kept in unfit conditions, with no thought about the welfare of the animal.

It’s ironic that the sale of tiger parts is illegal, supposedly internationally as well as in China, and yet these tiger farms go unchecked, with 1,000’s of tigers in captivity under the pretense of conservation, it’s a difficult pill to swallow. Thankfully, as said before, there are a number of groups trying to bring this to an end and help recover the wild tiger, let’s hope they aren’t too late.

Tigers can move silently in brush due to the soft pads on their feet.

A tiger may only successfully kill once every 10 attempts, but one kill can last them a week.

Tigers are the largest cat in the world and can way between 300-600lb.

Contrary to many other cats, tigers love water, they will lay in a pool to cool off, or swim across wide-open water to get to other hunting grounds. They are excellent swimmers.

It has been said that a tiger’s roar can be heard up to 3 kilometers away.

Tigers are carnivores and only eat meat, they also hunt alone so no sharing.

A tiger can run up to 65kmh, which is pretty good for such a hefty cat.

Every tiger has a different stripe pattern, their stripes are as unique as our fingerprints.

Fossils have been dug up in China that confirmed tigers lived about 2 million years ago, wow.

The tiger has night vision 6 times greater than humans.

Tigers are at the top of the food chain in the wild, they have no natural enemies, apart from humans.

The tiger’s habitat is quite diverse, they generally inhabit forest areas with plenty of trees, but they are also at home in savannahs, jungles, grasslands, and mangrove swamps. Because they are such avid swimmers, rivers and canals provide no barrier for them to explore further afield. The tigers hunting ground can be hundreds of square miles so they are definitely capable of inhabiting many different types of terrain.

The tiger is purely a meat-eater, and generally, they will hunt very large prey to sustain them for up to 2 weeks at a time. Prey depends on the availability and which area tigers are located in, often they will hunt Elk, Deer, Cattle, Goats, Wild Pigs, and even baby Elephants. If it’s meat, nothing is off the menu for the tiger, as if a smaller meal comes their way, they will take it.

The tiger usually opts for larger prey and will often gorge until the meat is all finished. Having said that, it’s not unusual for them to take smaller meals like a monkey, turkey, birds, fish, and even the odd snake. Tigers have even been known to take down a bear, crocodile and even adult bison, they are definitely formidable hunters. Though if large prey is scarce they will also switch to small meals like frogs, lizards, and even crabs, whatever is available.

We hope you enjoyed our tiger article, we will be writing many more about the tiger because there is so much more to discuss. Don’t forget to check out our article about white tigers, you can find it here:

White tigers, how rare are they? 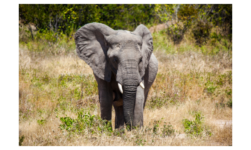 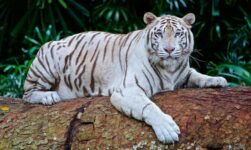 White Tigers, How Rare Are They?